130 crore Indians are proud of your courage: PM Modi to soldiers injured in Galwan 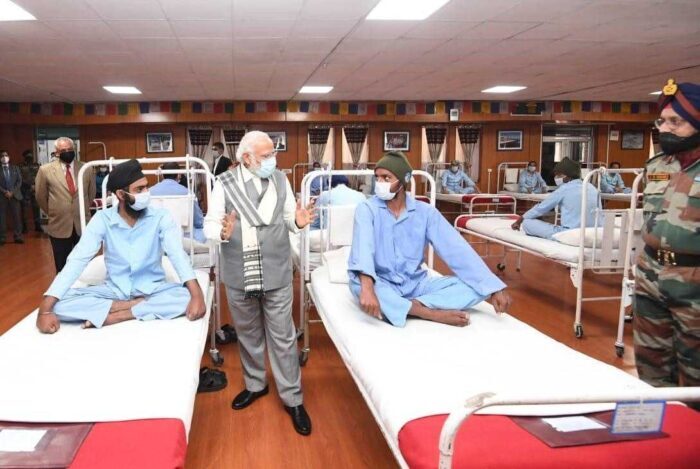 New Delhi: Prime Minister Narendra Modi, during a surprise visit to Ladakh on Friday amid heightened tensions between India and China, told soldiers that their bravery and courage were incomparable. The prime minister praised the troops for serving their country under challenging circumstances. The prime minister also said that the “enemy” had seen the “fire and fury” of India’s soldiers.

Indo-China tensions heightened following a violent clash between soldiers of the two countries on June 15 along the Line of Actual Control in Ladakh. Twenty Indian soldiers were killed and 76 were injured in the worst instance of violence between the two neighbouring countries in over 40 years. “Your determination is higher than the heights where you all are posted,” the prime minister said in his address to the soldiers. “Your willpower is unshakable like the mountains around you.”

In an apparent reference to China, the prime minister said that the weak can never accomplish peace like the brave do. “Power is the ability to bring peace,” Modi said. “India is widening its powers on land, air and water and this is for the welfare of mankind.” Modi told the soldiers that the conditions in which they perform their duties are among the toughest in the world. “The country’s safety is in your firm hands and the people have immense faith in you,” the prime minister said. “Every Indian’s head bows before its brave saviours.” Chief of Defence Staff General Bipin Rawat and Army chief MM Naravane accompanied the prime minister to Leh. Later, Modi met soldiers who had been wounded in the Ladakh standoff.

The prime minister told the troops that their bravery will be a “source of inspiration for times to come”. He said that 130 crore Indians were proud of the courage of these soldiers. “Your courage will be a motivation for our youth for a long time to come,” Modi said. He claimed that even the rest of the world is amazed by the training and courage of the soldiers. Modi added that India has never surrendered to the whims of any foreign power, nor will it do so in the future.