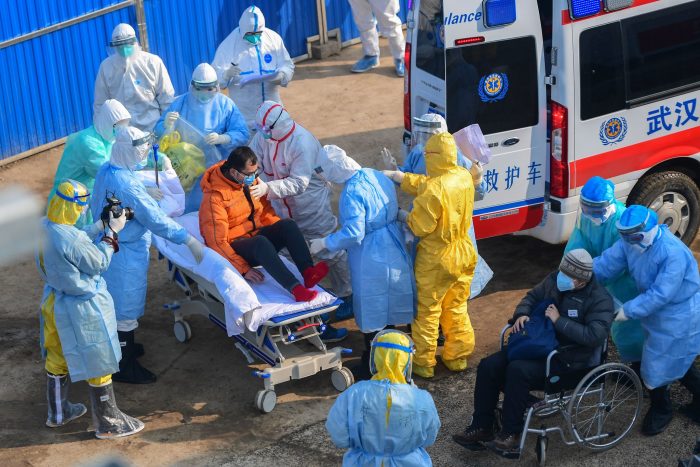 New York: The United States recorded 1,635 coronavirus deaths in the past 24 hours, bringing the total to 77,178, according to the latest real-time tally Friday reported by Johns Hopkins University.

The country hardest hit by the pandemic in terms of the number of fatalities has now confirmed a total of 1,283,829 cases, the Baltimore-based school reported. The US vice president’s spokeswoman became the second White House staffer this week to test positive for coronavirus, officials said Friday, even as President Donald Trump continued to go mask-free at a World War II, commemoration with veterans in their 90s. News that staffer Katie Miller had fallen ill boosted fears that the White House is at risk of becoming a viral hot spot just when Donald Trump is leading efforts to wind down nationwide quarantine measures that have devastated the world’s biggest economy. Miller is spokeswoman for Vice President Mike Pence, giving her frequent access to high-level meetings.

She is also married to top Trump aide Stephen Miller, the speech writer behind the administration’s hardline immigration measures. A senior administration official initially said only that a member of Pence’s staff had been tested and found to have coronavirus. Trump, speaking later at an event with Republican lawmakers, identified the person as “Katie,” saying she works with Pence as a “press person.” This confirmed multiple US media reports that Katie Miller was the person in question. As recently as Thursday, Miller was seen mingling with officials at an outdoor prayer ceremony hosted by Trump and attended by dozens of people, including the wives of Trump and Pence and many senior staff. Miller’s positive test disrupted a trip by Pence to Des Moines, Iowa, with six people who may have had contact with her made to get off the airplane.

Out of abundance of caution we went back and looked into all the person’s contacts most recently, said the senior administration official, who asked not to be named. On Thursday, a Trump spokesman said the president’s valet, a member of the military who is in close contact with the president, had tested positive. Trump and Pence were tested and confirmed to be negative. Both are tested daily.

US suffers biggest job losses in history With shops and factories closed nationwide due to the coronavirus pandemic, nearly all of the jobs created in the US economy in the last decade were wiped out in a single month. An unprecedented 20.5 million jobs were destroyed in April in the world’s largest economy, the biggest amount ever recorded, the Labor Department said in a report released Friday, the first to capture the impact of a full month of the lockdowns. That drove the unemployment rate to 14.7 percent from 4.4 percent in March — the highest level since the Great Depression of the last century.

The United States is home to the world’s largest and deadliest coronavirus outbreak, with more than 75,000 fatalities and 1.2 million cases reported as of Thursday, according to Johns Hopkins University. The economic damage from the lockdowns to contain the virus has been swift and stunning, despite nearly $3 trillion in financial aid approved by Congress, and there is growing fear that the temporary layoffs will become permanent since some companies won’t survive. Taken together, 21.4 million jobs were destroyed in March and April, nearly equal to the 23 million positions created during the economy’s long expansion from February 2010 to February 2020.

All major industry sectors felt the pain. Leisure and hospitality was the first sector hit and the one bearing the brunt of the impact of the lockdowns, shedding 7.7 million jobs, while manufacturing eliminated 1.3 million positions. Those two sectors alone added up to more than the 8.6 million total jobs lost in the two years of the global financial crisis. As bad as the data was, the real picture likely is much worse. The Labor Department noted the unemployment rate would have been closer to 20 percent, but some workers were misclassified as employed when they actually had been laid off because of COVID-19.

The pandemic has caused many employees to leave the workforce altogether, while others have been forced from full-time jobs into part-time work. The measure of the labor force as a share of the total population sunk to 51.3 percent, its lowest in history, meaning nearly half of working-age Americans are not employed. Minorities were hit particularly hard: African American unemployment spiked to 16.7 percent from 6.7 percent in March, while the rate for Hispanics was 18.9 percent, more than triple last month.

President Donald Trump said Friday the numbers were expected, and promised: “I’ll bring it back.” I think it’s going to come back blazing, he told reporters on the economy. But 57-year-old Sandra Mahesh, who recently lost her job in Maryland and had her unemployment benefits cut off, is not hopeful. I don’t see a good future with America right now, she told AFP. While Trump proclaimed on Fox News earlier Friday that “even the Democrats aren’t blaming me” for the job losses, Democratic presidential candidate Joe Biden lambasted him for his handling of the crisis. Donald Trump utterly failed to prepare for this pandemic and delayed in taking the necessary steps to safeguard our nation against the near-worst-case economic scenario we are now living,” Biden said in a statement. Low-wage destruction -Echoing the fears of many economists over the fates of small businesses, Biden said, “A lot of them won’t open again because they do not have a cushion due to three years of Trump’s policies that reward the biggest companies. The report showed average wages rose, but economists say that is merely another sign of catastrophe.

In April, the job losses were disproportionately concentrated in relatively low-wage sectors like leisure and recreation, Ian Shepherdson of Pantheon Macroeconomics said in an analysis. A University of Chicago study based on the huge ADP private payrolls database found that low-wage workers saw employment decline by 35 percent, a rate three times as high as the nine percent decline seen by top earners. Job losses at the bottom of the wage scale account for one third of the total decline, the authors found.

The beginning of this likely ‘Pandemic Recession’ is unprecedented, co-author John Grigsby said on Twitter. Labor market declines concentrated among low-income workers and small firms, precisely those that are unlikely to have savings to smooth over shock.