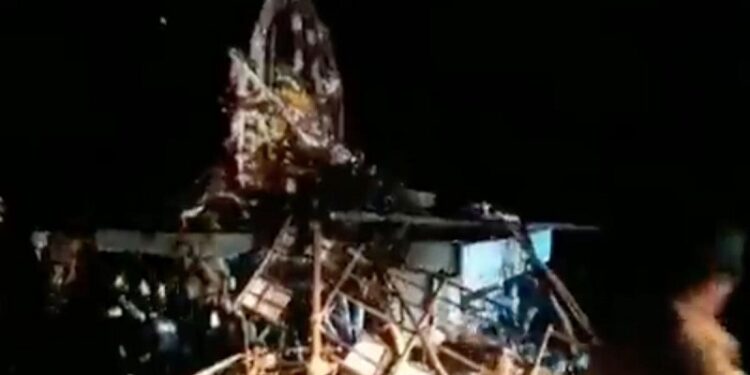 Electrocution during a chariot procession: At least 11 people died and 15 others were injured after electrocution during a chariot procession at a temple in Tamil Nadu’s Thanjavur district early this morning, police said. Police said the incident occurred when the temple palanquin or temple car they were standing on came into contact with a high-transmission line at Appar Madam temple in Kalimedu.

“The temple palanquin faced some obstacle when it was taking a turn. It came into contact with the overhead line while reversing,” officials said. Two among those killed were children, officials said, adding that the injured have been admitted to the nearby hospital for treatment.

“A case has been registered in the matter and an investigation is underway,” said V Balakrishnan, Inspector General of Police, Central Zone, Tiruchirappalli. Thousands of devotees participate in the annual chariot festival in Tamil Nadu every year. The incident has raised questions about lapses in precautionary arrangements made for the procession at the Appar Madam temple.

A senior police official told media that normally power line along the temple car route is turned off to avoid any untoward incident. “However, the palanquin was not tall enough to touch the high-transmission line, and thus the power supply was not turned off this time.

Prime Minister Narendra Modi tweeted that he was “deeply pained” over the incident, and announced a compensation of Rs 2 lakh each to the families of those who lost their lives and Rs 5 lakh each to the injured.